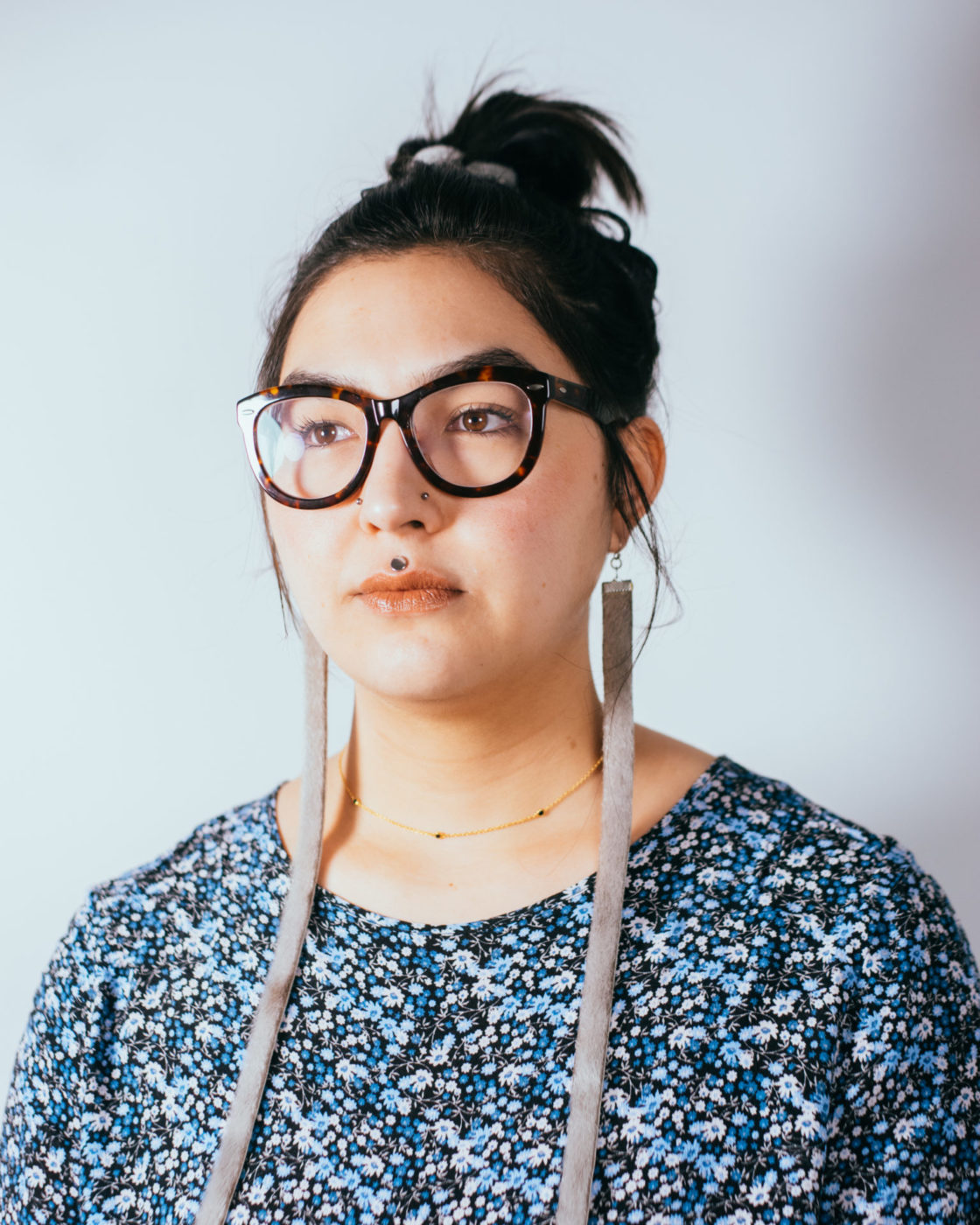 They bring perspectives from the Inuvialuit Settlement Region to the curatorial team for the Inuit Art Centre’s inaugural exhibition. INUA will feature contemporary Inuit artists working in a variety of mediums and will challenge our preconceived notions of Inuit art.

Now based in Mohkinstsis (Calgary), Kablusiak works alongside Dr. Heather Igloliorte, asinnajaq, and Krista Ulujuk Zawadski, three other curators from across Inuit Nunangat who are pursuing educational and career opportunities in the urban south.

“I love Calgary for the art community. I have a strong and supportive friend network here. We listen to each other and host dinners.” Kablusiak is currently working at TRUCK Contemporary Art and creating their compelling art. “My most recent piece was an installation using an old slide projector. It’s a very difficult medium, but satisfying to work with!”

Kablusiak started drawing and painting in high school and credits an encouraging art educator in helping them apply for art school and pursue art professionally. “I’m still drawn to drawing, because it lends itself to so many possibilities, but I change my media all the time according to the project.”

“There are a couple of things that are distinctively Inuvialuit,” says Kablusiak. The Delta Braid is a traditional art form originating from the Inuvialuit Settlement Region, in the northernmost part of the Northwest Territories. For generations, artists such as Maureen Gruben have used colourful ribbons of geometric pattern of bias tape and seam bindings to decorate parkas and dresses, to tell their stories.

Delta Braids are still created today, each one unique and rich with history. “I feel warm and happy when I see that pattern,” says Kablusiak.

When they were connected by a mutual friend in 2017, Dr. Heather Igloliorte invited Kablusiak to join the curatorial team for INUA. “I started to cry when Heather asked me. She’s an amazing, supportive person and I knew this was an opportunity to be part of something beautiful. The curatorial team has been really amazing in acknowledging that I’m an artist who takes on everything, because the team is also doing a million things—they are super accommodating and lovely.”

“We are in the meeting stages for INUA, and have the final list of artists.” Kablusiak speaks enthusiastically about working on the inaugural show. “I’m writing my essay for the catalogue and Heather suggested I use the fact that I’m a maker myself, as a starting point to frame my thoughts about curating the show.”

“The exciting thing about curating is that it gives you a chance to direct the narrative.” Kablusiak says. “Narratives about Inuit have been so destructive since the 60s. It’s so powerful to be able to control these narratives. I think it will set a precedent.”

Kablusiak’s great uncle, the accomplished sculptor Bill Nasogaluak will have work in the show. His artworks illustrate Inuvialuit culture and offer political and social commentary of contemporary Inuit life.

Darcie Bernhardt, an emerging visual artist and curator from Tuktoyaktuk, NT, will also have art in INUA. She focuses on drawing and painting contemporary life in Northern communities. Kablusiak is excited to have Darcie as part of the show: “She recently graduated from the Nova Scotia College of Art and Design. She mixes a lot of really beautiful colours, her paintings have a great light quality.”

The Inuit Art Centre aims to connect North and South, building bridges to strengthen relationships. “Galleries can be very intimidating. With our work we are looking to deconstruct that, and make it a welcoming space. My dream is that when an Inuk walks into the Inuit Art Centre, they’ll feel at home and welcomed.”

Kablusiak explains their hopes for the visitors to the Inuit Art Centre and their experience of the artworks at INUA: “In my 26 years on this Earth, I have met a lot of people who don’t know anything about Inuit, which is depressing. When Non Inuit experience the art, I want them to take away something new. We’re a contemporary people who exist outside of the traditional cannon of what art history has set up, beyond the ethnographic gaze most Indigenous people have been subjected to.”

In the lead-up to the opening of the Inuit Art Centre, Kablusiak will have two residencies in 2020, including one in Dawson City at the Yukon School of Visual Arts, two solo shows, a handful of group shows, and a number of artist talks.

“I often speak to students on making the leap from the art school environment to the professional world.” Kablusiak, a graduate of MacEwan University and Alberta University of the Arts, focuses their artist talks on de-mystifying the transition and encouraging art students. “So they know that even though it’s scary, it’s doable.”

Kablusiak hopes that Inuit art will be also be de-mystified. “I want our art to be seen as less mystical. It’s really funny that our art has been presented as such. We’re just artists. It’s a conceptual thing—Inuit have been pushed out to the fringes for so long that any time we make art that’s ‘contemporary’, it’s received differently. There’s a weird imbalance in the art world. I want people to know we’re contemporary. We’re cool.”

2020: a watershed year for Indigenous art

When the WAG Inuit Art Centre opens in 2020, it will increase Canadians’ understanding and appreciation of Inuit art, perspectives and history, and build bridges...

Connecting with the voices of art - a great time to visit the WAG!

Your support is helping the WAG introduce more people to the power of Inuit art, even before the Inuit Art Centre opens. We recently sent...

“I am one of the four curators representing all the different regions from across the Arctic,” Krista Ulujuk Zawadski says. “I see this opportunity, as...

Heather Igloliorte, lead curator for INUA, recalls when she was invited by the Winnipeg Art Gallery to be a curator for the Inuit Art Centre’s...

“There is going to be space here to look at Inuit art from the Inuvialuit region to the Nunatsiavut region, from Alaska straight through to...
Review our COVID-19 safety protocols
The Gallery is now open with new safety protocols in place. Learn More >>>