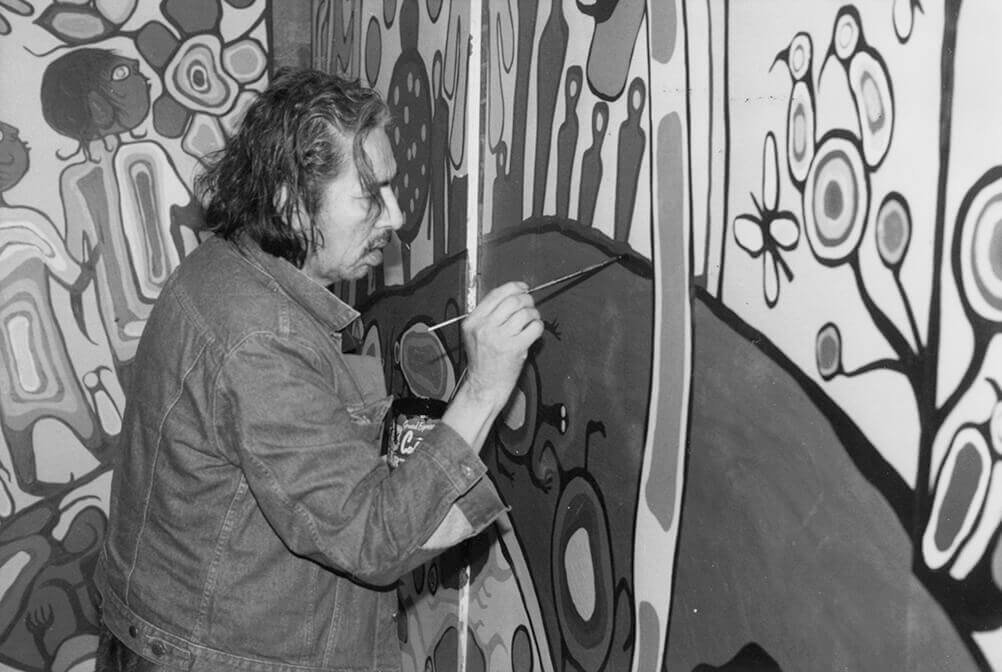 Norval Morrisseau was a giant of the Canadian art world. Now one of his most monumental works—in terms of both size and significance—is being shown at the WAG for the first time. Androgyny is a magnificent, wall-filling canvas that the Anishinaabe painter made as a gift to the people of Canada in 1983.

In Morrisseau’s signature style, with heavy black outlines, intense colours and segmented bodies, it depicts all of Earth’s creatures—birds, butterflies, fish, frogs, turtles, muskrats, people—co-existing in harmony, overseen by the central figure of the Thunderbird.

Indigenous art historian Viviane Gray writes that the vibrant work presents “a thriving and bountiful world in which all the diverse elements, including the male and female characteristics that are part of nature, are in perfect balance.”

The massive painting is on loan from the federal government. “We jumped at the opportunity to host it,” says Jaimie Isaac, WAG Curator of Indigenous and Contemporary Art. “It’s layered with traditional meaning. Morrisseau is talking about the balance of the four realms of earth, water, sky, and underworld.”

“He made it as an offering to Canada when Pierre Trudeau was prime minister. Now Trudeau’s son is in that same position, and the artwork is very relevant today. Androgyny illustrates a world in balance and its cyclical nature. It addresses issues like gender equality, non-binary gender identity, environmental concerns, climate change, and notions of reconciliation between Indigenous and non-Indigenous peoples.”

Morrisseau was born in 1932 and grew up in northern Ontario. He had kinship ties to First Nations in Manitoba. In Winnipeg in the 1970s, he joined with six other artists to form the influential Professional Native Indian Artists Inc.

“This painting’s relevance in Winnipeg is really strong,” Isaac says. Androgyny was originally installed in a federal government building. In 2006, a year before the artist’s death, the National Gallery of Canada gave it a prominent place in the exhibition Norval Morrisseau: Shaman Artist. Subsequently displayed at Ottawa’s Rideau Hall, Androgyny is now widely considered a masterpiece.

As for the painting’s immense proportions, “It was a really grand gesture on Morrisseau’s behalf,” Isaac says. “The many layers of reference and the breadth of knowledge shared in this mural-sized painting are profound.”

Indigenous art historian Carmen Robertson writes that the acclaimed artist presented Androgyny to all Canadians as “a decolonizing gesture of reconciliation.” The WAG’s Isaac agrees. “Reconciliation is about relationship-making,” she says. “Morrisseau’s offering implied that he was seeking a reciprocal relationship between Indigenous peoples and Canada.”

Androgyny is on view at the WAG until fall 2019.

In celebration and anticipation of National Indigenous Peoples Day, June 21st, the WAG recognizes and honours the heritage, cultures and valuable contributions to society by...
Review our COVID-19 safety protocols
The Gallery is now open with new safety protocols in place. Learn More >>>